“AS A YOUNG HOMO, YOU MATTER” 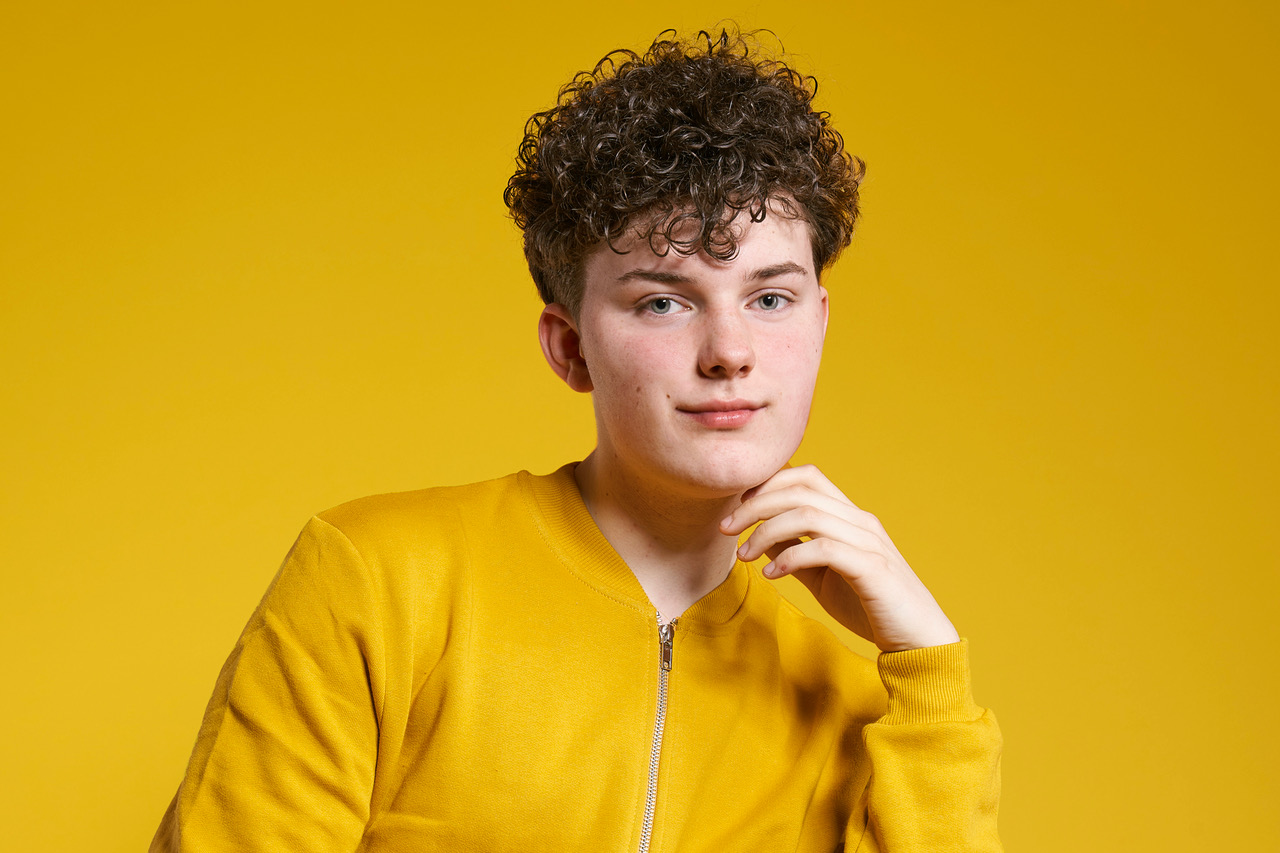 For Justin Hermsen, who had just turned sixteen, it was a big surprise that he was nominated as a junior ambassador FOR Pride Amsterdam. Justin was speechless when he heard that he was unanimously chosen as the best by the jury that Sunday afternoon in February in the A’DAM Toren. “You’re not the only gay in town!”

After the party overlooking a beautiful view of the city, we spoke with an inspired Justin about his youth, ambitions and dreams and of course ambassadorship. His first reaction to his election? “I had a great wow feeling, for me it is the icing on the cake to be allowed to do this.” With Ambassador Jeffrey Wammes he forms the 2J’s of the Pride.

BIBLE BELT
As the youngest son in his family, he grew up in Rhenen Utrecht, a town on the outskirts of theBible Belt. The deeply religious community believes that women and men are inextricably linked. There is a big taboo on homosexuality. Justin goes to a public school, where the subject of homosexuality does not seem to be a taboo. He nevertheless comments: “It seems easy to say, but it is difficult to be different from others. It is quite difficult to be gay in the vicinity of the Bible Belt.” During his ambassadorship he will continue to emphasize that people outside the Randstad also belong. “It is not an exclusive Amsterdam party.”

TWELVE YEARS
“At the age of twelve I discovered that I found boys more attractive than girls. I saw a very handsome boy and immediately I felt like: wow! At the same time, I thought that this was not possible at all. That it would pass. ”But the feeling remained. Although his parents are open minded, he decides to keep his “secret” to himself. He does share it with a niece, whom he fully trusts. When he is fourteen, he knows for sure. “That feeling when you come out cannot be described. Finally I was able to express my feelings.
”Until the moment he comes out, he feels very lonely, he says softly. “I felt unheard and often only on loan.” For him this is the reason to become active in the Gender and Sexuality Alliance at his school.

STRONG
Although he is busy with school, he sees a chance to expand his network in a short time. His enthusiasm and decisiveness are determining factors. “I am proud of who I am. I have nice people around me. My family and friends really support me.” When he told his mother that he is gay, she said, “Now we can watch boys together.”

A FIGHTER
He sees ignorance and sometimes hatred around him. “Together with a few other students, I organized Purple Friday at my school last year.” But it didn’t go smoothly, he says. “I was presenting a show in the auditorium when someone got up to throw a piece of cucumber at me. I reacted very impulsively and put him on the spot. That incident is burning in my mind. Then a discussion about homosexuality arose. I can be very witty and actually always have my word ready. Such events actually make me more competitive.” Justin regularly receives hate reactions on social media but always finds a way to deal with it. “Personally it doesn’t bother me so much, it doesn’t affect me.” But it makes him even more convinced that a Pride is desperately needed. “And look at that Nashville statement from earlier this year, of which the homophobia is written all over. You are tolerated, but accepted? Not so. “

THOUSAND PERCENT
Justin recognizes himself in the theme of Pride this year, “Remember the past, create the future.”“I will never forget the 1969 Stonewall demonstrators. They fought hard for our rights. Their generation stood for the ideals of freedom and respect. We as young people are now taking over from them. I think there is still a world to be won. I fight for one purpose: everyone matters, regardless of your origin or sexuality. I go for that one thousand percent. I will never give up that fight. “His motto? “Be yourself, then you are the best, but don’t always take yourself too seriously.”

COUNT IN
As a youth ambassador, Justin mainly wants to get the message out that as a young gay you count and you should not be let down. Certainly not at heavily Christian schools, he adds. “Know that you matter that you are not alone. Moreover, I want to give a voice to people who are not being heard. Judge me by my actions, not what I look like or who I fall for. “

ROLE MODEL
How will Justin feel being a role model for gay youth? “The ambassadorship is the icing on the cake for me. If there is only one person I can inspire, then I have achieved my goal.” When people ask him if Pride is still needed, he always has a witty response. “A straight is socially accepted and is not beaten, spit on or abused because of his or her orientation. Like an LGBT person.” The ambassadorship is made for him.

STRIP
At the last minute he expresses his great surprise that a discussion erupted about the lesbian couple in the Dutch Donald Duck comic. “I found that ridiculous. Homosexuality is a reality, it must be normal, isn’t it?” His eyes are bright. He continues to insist that honest information is the most important thing. “You can’t start that early enough.” Pride Amsterdam has a good ambassador with combative curly hair. He smiles shyly and emphasizes again: “Always realize that you are not the only gay in town “. His agenda now fills up with high speed. “My schoolwork suffers a bit. The question is whether I will transfer to the fifth. But anyway: I live towards Pride and am now fully enjoying the preparations.” As far as he is concerned, Pride Amsterdam cannot burst out early enough.

“YOU ARE THE MOST BEAUTIFUL, IF YOU ARE YOURSELF”

“OUR FREEDOM IS THANKS TO THE PREVIOUS GENERATION, NOW WE WILL TAKE IT OVER”