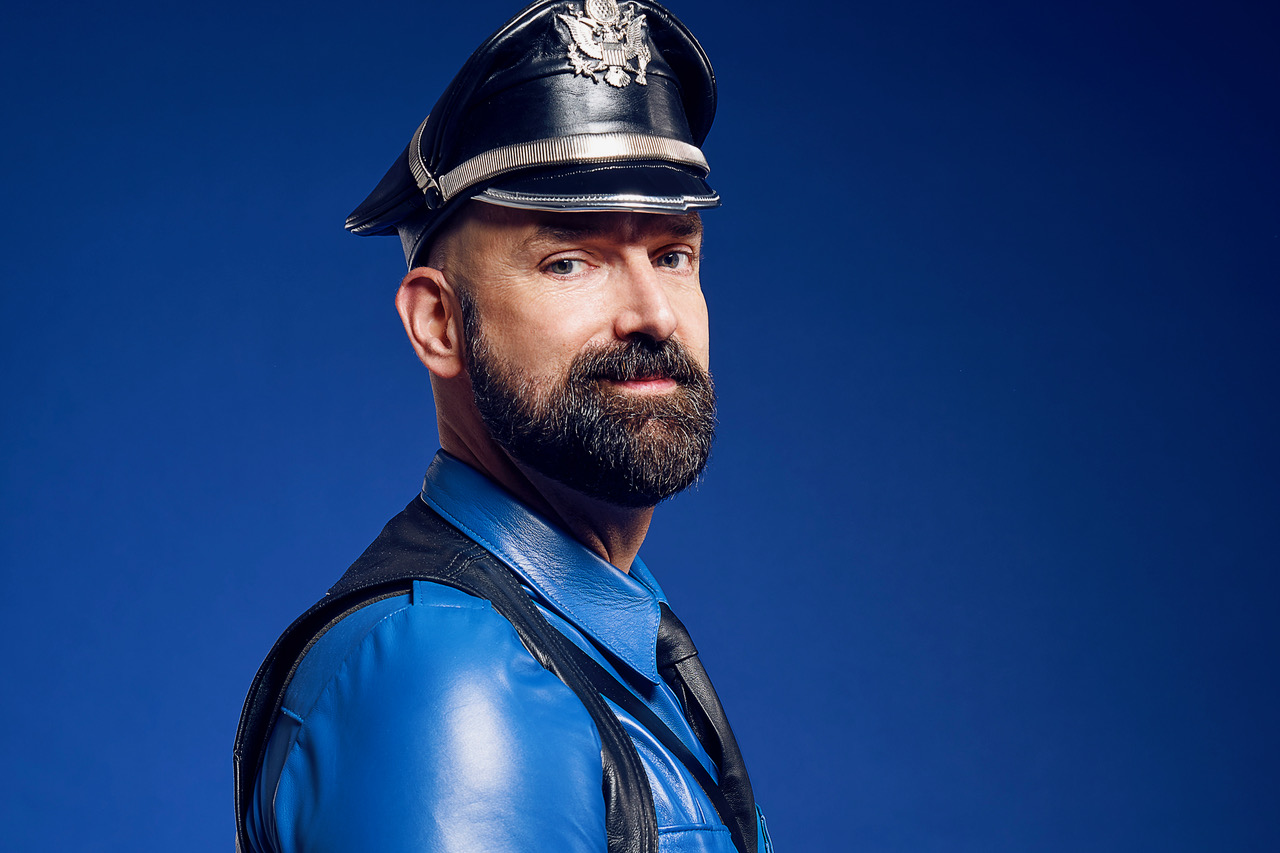 This year’s Pride Amsterdam ambassadors are a mixed bunch. Raymond Timmer is a striking character that has earned his mark as a figurehead for other foundations. To his great surprise, former Mr Leather Europe was chosen as an ambassador. “It is so important to give something back.”

45-year-old Raymond Timmer grew up in a strict Christian environment in Barneveld; something he has in common with Youth Pride ambassador Justin who is from Rhenen. Both ambassadors come from the edge of the Bible Belt. But neither is religious.

TRAVEL BY PLANE
He has had a wonderful childhood. “I was raised freely in a nice family. In my adolescent years, I noticed that I was “different” and started experimenting with sex.” After high school, young Raymond followed his dream. From a young age he wanted to become a pilot. He started his education at the Academy for Traffic Aviation. Where the training is very intensive. Despite this, Raymond still managed to have a good time.

After this training he left for the United States where he ends up in California, Florida and finally Arizona. The metropolis of Phoenix is literally a comfort blanket for him. It doesn’t take long for Timmer to discovers the lively gay scene that soon has no secrets from him. He is particularly interested in the number of leather bars. As a boy he saw the Police Academy film with his sister. He became fascinated by the leather and the uniforms. It was a revelation for him. In particular, he cannot stop thinking about the exciting bodies of the actors who are wearing tight-fitting clothes and when he sees the exciting drawings of Tom of Finland, he is done. Leather sets him free.

“I have lived intensively there. I have made great friends and have visited many Prides at the weekends. It was a fantastic time for me. I was able to develop in every way there. ”

BOX
“Speaking of our Pride: it is so unique in the world. In America, the Pride festivals are held in parks where there is great control. You are confined within a closed area. Here in Amsterdam you are part of the city and you can walk hand-in-hand. In the United States it is different because you are put in a box. They are slightly behind when it comes to the gay scene. You can be completely free here in Amsterdam.” When he returned to the Netherlands in 2008, he accidentally ends up in the Engel café on the Zeedijk in Amsterdam, a stone’s throw from the many leather bars. It doesn’t take long before he is behind the bar.

FEAR
He carefully takes his first steps in the leather scene. “I really had to cross a threshold,” he admits. “How you look at it, people sometimes look at you a bit strange.” He emphasizes that despite the tolerance, the fetish scene has been squeezed in a corner. “Many people don’t know what it’s about. There are so many differences in the spectrum in the LGBT scene. I notice that there is often fear. “He is therefore strongly committed to that ignorance.”

HIV
Raymond was shown last year during a poster campaign of the magazine Hello Gorgeous. It is not surprising that he was personally committed to this. “I was diagnosed with HIV a few years ago.”It was a shock for him. He became very ill and had various complications. For a year and a half he went through a deep depression. “To my great sorrow I lost my pilot’s license and my work as a pilot.” After the HIV diagnosis, his boyfriend dropped him immediately. His world is collapsing.

FRAME IMAGE
He is proud that he is now one of the ambassadors. He could never have dreamt that he would inspire so many people. His agenda is already filling like lightning. He makes all the time for his work as a Pride ambassador, he assures. “I can put the leather and fetish scene on the map. I would like to build a bridge between two worlds. I notice that we are sometimes seen with strange eyes within the gay scene. But there is nothing wrong with us as leather lovers. ”The tough guy in the super tight leather grins for a moment. In his position as Mr Leather Europe, he devoted himself with heart and soul to the Rainbow Railroad project. “They help gay people in Chechnya and Brunei, among others, to escape gay persecution there.” It made a lot of money. “It touches me that gays are still being prosecuted and that homosexuality is still illegal in many countries.”

VISIBILITY
The taboo associated with the leather fetish still affects him. “If we continue to push ourselves away in corners or in dark rooms, then we will not become visible.” And so, you end up in a vicious circle: prejudices persist and discrimination becomes easier. “He is convinced that when you engage in conversation, understanding automatically emerges. He laughs when he talks about the first time he took to the streets in leather. “I was pretty nervous. I went to a leather party and got completely in leather on the tram. I sat down next to a Surinamese lady had a nice conversation with me without glancing or disgusting. I thought that was cool.” It should always be that way for him.

LEATHER IS TASTY
Timmer was previously the face of the leather scene as Mr Leather Europe. In that role he visited many countries and events. He is most proud of the men and women who now openly wear leather that previously didn’t dare to do this. “He is very pleased that he has been able to touch people with his openness about his fetish. Leather is just nice, he wants to say. “There is nothing wrong with that.” Raymond is worried that fewer young people are active in “his” scene.“We have to breathe new life into it. The scene is ageing, partly because it is an expensive fetish. For young people that can sometimes be a threshold. The leather scene is for all shapes and sizes. It is often a misunderstanding that you only belong in the scene when you are muscular. An absolute misconception. ”

My message? “I want to show that everyone belongs. Everyone must be free to complete their leather fetish in their own way. Live and let live.”